This is a review of this new eye catching car made by Aston Martin’s Q division in 2020. Q by Aston Martin built just one of these cars so you just hope to see this at a fancy auto show.

This can is a one off, there will be no more made, there is only one. It was a creation of the Aston Martin’s Q’s, it is a unique design which is also an amazing tribute. This is a tribute to Victor Gauntlet who carried the company when they were failing in the 80’s. This one off car is not road legal but it could certainly be made road legal. 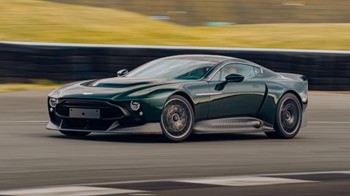 This is about the driving of the car and the different features of it.

The suspension is very firm, you sit quite low, it has a great manual shift and when driving it you have to make sure you are aware how long the bonnet actually is.

Even though it is such an amazing car, it still has some flaws like everything. The pedal positions aren’t perfect and the throttle is too far up the footwell but these are easily fixable. It also has a very heavy clutch, but you don’t need a throttle to get it going so it isn’t too abrupt to drive.

For the top end the max revs you can get is 8,200rpm and the peak torque doesn’t start until it gets to 65,000rpm. The mid-range is mighty, urgent and has an amazing push of power and noise coming out of it and it has a huge powerful engine. This car has much softer brake pedals compared to many other cars and it steers absolutely beautiful so the pros are much greater than the cons of this car.

The inside of the car has been amazingly put all together for it to have an 80’s theme because of the tribute was in the 80’s.

It has a great funky steering wheel that you can tell cars from the 80’s would have had. All the floor is plain and uncarpeted which is a strange view but the roof is fully covered in leathers and carbon which is beautifully placed. Some of the controllers by the steering wheel have had to be changed and repurposed for the horn and rotary controllers for the wipes.

The back seats are fixed in and cannot be moved just like in the days of the 80’s. But one thing they haven’t missed out is vital boot space.

Owning this car would cost a large amount like 4 or 5 million, which sounds like a lot but compared to what you are getting is actually not that much.

As mean as this is a one off, unique car which is tributed to a special man and an era of history, you would think it would be so much more expensive to buy.

The running costs is another story, it would probably cost tens of thousands to just hire this for going round the track or something. It’s this expensive because there is only one of them, so if there was damage or it broke while something else was using it, it would be extremely bad.

It has been said to be one of the best one off cars that have been made, as it has nothing extremely special or fancy about it. You can tell it wasn’t a car made to fulfil someone’s fantasy, it’s a very well thought out design that is something different. It was crafted to show off a special memorable era in the history of the company.